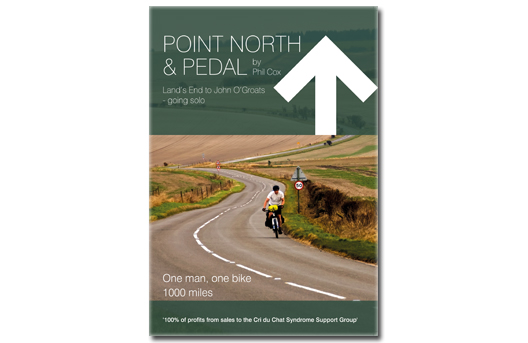 The delights of wearing lycra in public:

“Finally, Whitchurch Truck Stop came into view next to a large roundabout/junction with the A41. I parked up and ordered a bacon and mushroom sandwich with a coffee. I wasn’t particularly hungry; this feed stop was more about comfort following the rather damp and painful morning. There were a few occupied tables but it wasn’t too busy. I noted that one impressively built driver had ordered the main breakfast; it was jaw droppingly huge with enough fried material in it to make your arteries instantly fur up from the aroma alone. I enjoy a fry up once in a blue moon as I take the puritan view that it’s ultimately bad for you if eaten regularly; I also think that if you eat it infrequently, it still tastes good. His hands and cutlery became shovels and the food began to disappear in no uncertain terms. The whole scene was against everything I know and believe in; the creation of another NHS statistic in front of my very eyes. I’m not aiming it at the bloke personally, just our convenience obsessed society; it must be hard to eat well when you are a driver but ordering food like that on a regular basis has to be asking for trouble.

Having passed judgement on the western world’s eating habits I then made a serious mistake by taking off my jacket leaving me in my bib shorts and jersey and nothing else. A hush fell, the bacon stopped sizzling, a chair scraped as someone turned to look at the Pet Shop Boy backing singer who was waiting on his virtuous food order (I did ask for brown bread). A half imagined growl emanated from somewhere in the room. I had a quick look around, winked at the lady behind the counter and sat down to look at the map. She was a robust woman with dark hair and a pleasant smile. I’d got the distinct feeling that she was being deliberately obsequious to avoid any conflict with customers in what was a very male-dominated environment.

I’d been in a situation like this once before at a Halloween fancy dress party held by my good friends Bobby and Mary Gadsden (they were living in Challow at the time). The invitation said come dressed as something horrific. I went as the most horrific thing I could think of; something that would cause the most distress and offence…..Mr Muscle.

Those that know me will agree that my (then) 20 something frame adorned with yellow Marigolds, work shoes and socks, matching boxer shorts and vest plus my usual spectacles is a good likeness of the actor in the TV advertisements. It was sometimes tricky to hold a plate of food, a drink, the Mr Muscle bottle of cleaner and a J-Cloth. All was going well until a) I realised the party was also attended by a number of under 10 year olds and b) we de-camped to the pub. The regulars in the Good Lake Arms were reminiscent of the man folk from the deep south of America minus the hand guns and ‘Pray away the Gays’ badges. Low, guttural animal noises issued from some of the patrons and one man snarled at me to ‘Pull my F….trousers up’ which was an odd thing to say because I wasn’t wearing any. Bobby G’s daughter is now 21 and I am told she has almost recovered from the incident; this said, we are delighted to get an invite every year to their Halloween party now held at his home in Thatcham. This year, I was planning to go as a professional cyclist complete with blood transfusion bag and enormous syringe.

The sandwich arrived; I scoffed it in a manner unlike that of a Pet Shop Boy backing singer. Now for the toilets, I was really looking forward to this. A grizzly, gnarly faced trucker was washing his hands as I opened the door; smashing, just what you want. He glanced up at the mirror and I’m sure his eyes widened slightly as he caught sight of me. I deftly defused the situation by saying, ‘Alright? Nasty weather for shorts’, and went about my business. I could have selected the Duncan Norvelle routine with a quick tap on the shoulder followed by a camp, ‘Chase me’, but there was limited space with nowhere to run away to, it wouldn’t have worked. I got it about right I think.”

Now available for Kindle (click the book cover below)