The Tour of Britain was coming to town…Wantage Town that is! The event as a whole had stirred up a lot of media and public interest, a fantastic chance to see the great and the good competing on your door step albeit for a few seconds as the peloton flashes past. I was lucky enough to see it and soak up some of the atmosphere.

The week before the Tour, I had spent a few hours on a turbo trainer outside of the local Sainsbury’s raising money for a cancer charity and also a local defibrillator fund, the bikes and turbos were provided by www.bikelux.co.uk, a local company helping with the charity event. Richard from Bikelux explained that, on the following Friday, he would be setting up an awning on Chain Hill to watch the Tour approach and then sweep down into town. There was also a chance to have a go at the quickest 1km on the turbos, this sounded great fun so I booked the day off. 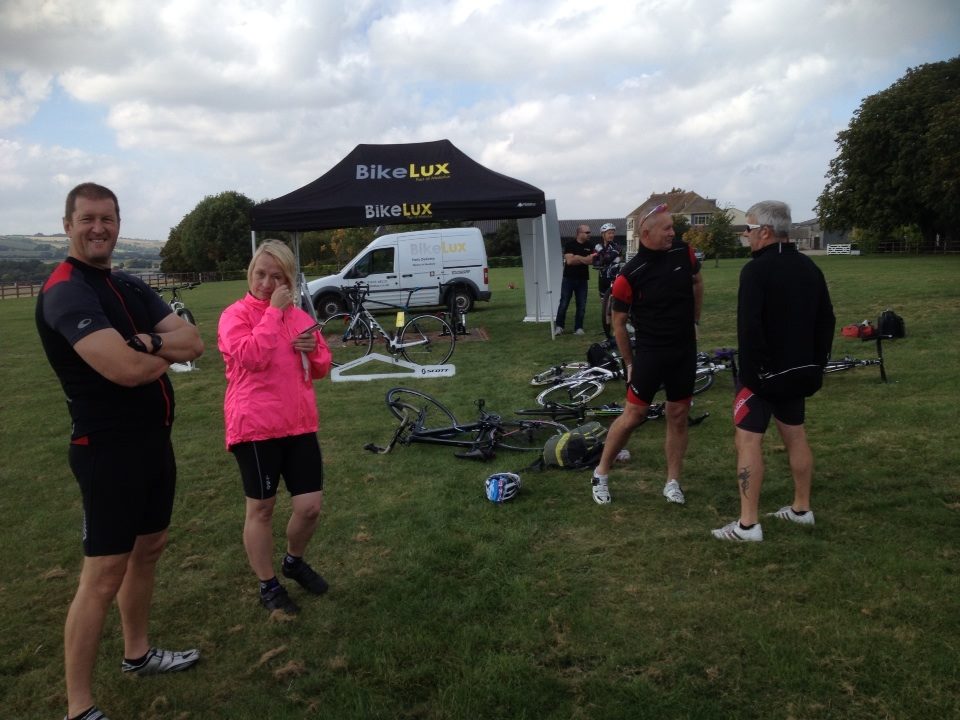 Steve, me and Nobby cycled up to Chain Hill from Steventon to find Sarah and Phil Tynan already there chatting to the TV and radio guys. It’s always interesting to hear presenters ask the questions, they never seem to run out of things to say. Richard did a quick interview too and then it was on to the important issues of the day: finding some food and also deciding where to stand.

Food was easy, bike folk always have food whether it be jelly babies or Spanish omelettes and today was no exception. Personally, I think you can never have too much food so once we had sampled the usual fodder we wandered over to the Umami tent and destroyed his stock of pork pies – they were handmade, full of calories and extremely tasty.

More people began to arrive, most were cyclists out for ride as well as taking in the Tour. There were a group of riders from Yorkshire who had been touring and had ridden from the Cotswolds to watch the stage. A welcoming message was chalked on the road for the riders and the scene was set; the excitement was building and the weather was being kind, it was hard to imagine a better place to watch a cycle race from.

The road management side of things appeared to be running well, plenty of police motorbikes and race marshals zipping up and down. About 5 minutes before the leaders came through, a car rolled slowly along giving race information over a loud speaker. This was a great touch and helped to build the excitement further; 3 breakaway riders (including Alex Dowsett) nearly 7 minutes ahead of the peloton….we waited.

The TV helicopter appeared overhead, the lead group of three were moving in a staggered line cycling towards us on an incline. It’s difficult to estimate pace but I suspect they were doing at least 22mph – uphill!. Dowsett got a warm welcome and a cheer from the crowd; the group came and went in a flash, all the riders were looking relaxed, as if they were on a Sunday ride-out. The peloton was next.

Finally, a dark mass of riders appeared near the Ridgeway, it swept down the inclines preceded by the lead cars and police bikes. We were positioned at the roadside, within touching distance, as the main group came through at a comfortable pace. I was struck by the noise of the tyres and also the clicking hubs. Cav and Wiggo got a massive shout but the applause and cheering were meant for all, people that ride know the effort required to sustain any sort of pace, these guys were demonstrating that in spades…almost superhuman.

And then it was done, pictures and videos were appearing on Facebook in large numbers, the race had captured the imagination of the town and was well supported. Stage finish in Wantage next time…bring it on!

My Tweets
@PitchedInLine @CPL Woa!17 weeks ago
RT @RossKemp: As an ambassador of @EndeavourFund, I believe that sport is for everyone, and today’s @SuperheroTri was a perfect example of…21 weeks ago
@englandcricket @JofraArcher And they call us whining poms.....🤣22 weeks ago
RT @CDCSSGUK: CdC Week: Family Celebrations! https://t.co/kTT3xwlKzz https://t.co/RCZAfeskVG37 weeks ago
@ClairePritchett Good to know5 hours ago