‘You do realise that come 2am tomorrow morning, I won’t want to cycle with you ***** anymore?’

We all laughed; each of us in a buoyant mood because the time had finally arrived for our 250 mile/24 hour cycle ride to raise money for Delete Blood Cancer. Although it was dark and a little cool, there was a sense of relief that we were finally underway. The first 45 miles had a certain familiarity even in the dark; we were still ‘local’ and had ridden these roads numerous times. Today was going to be something special.

We’d left Wantage Market Place at 5.30am, the town was quiet and voices were kept low. Street cleaners descended upon the place with a leaf blower fracturing the pre-event calm. There were a couple of jobs to do before we got underway, just tinkering really to make sure we had what we needed on board; a good way to dissipate nervous energy. 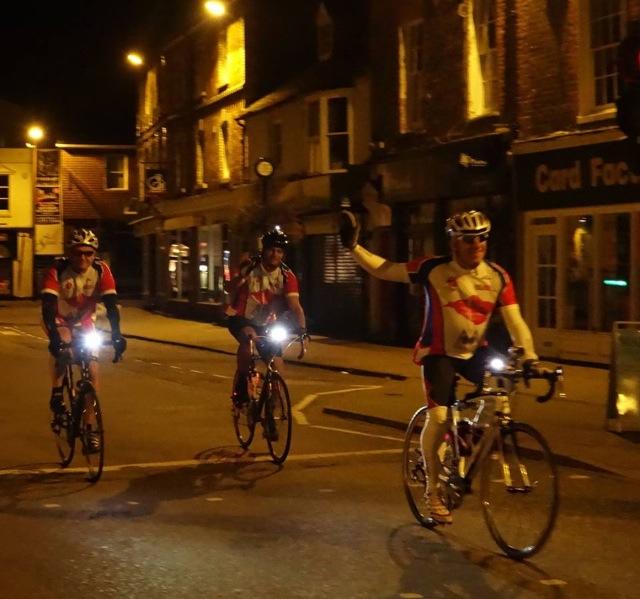 Phil T’s wife, Sarah, was on media duties collecting photo’s and video. Her day would consist of administering the Facebook ride page ensuring that people could get an update whenever they checked in. A very useful tool when it comes to driving sponsorship; we were hopeful that people would show their support as we rode to increase fundraising. Although we didn’t have a total in mind, it would be nice to see the donations page exceed £2,000 before finishing on Saturday morning.

Simon Cooper and Jamie Hollier parked the van up in the square and helped out with the last minute jobs. They were to be the mainland support crew on the road. Our plan involved grabbing ruck sacks full of essentials at the Lymington ferry terminal and handing the gear to Brian, our support driver on the island.  It was comforting to know that we had the support van to help us navigate and sort any issues that might arise.

Phil’s aunt, Sarah’s son Tom and Ray Collins also turned up very early doors to see us off. We have worked with Ray on various charity projects in the past as well as being there for his endurance challenges; his enthusiasm and inspiration are legendary, just what was called for this morning.

The time had come, we simply had to start pedalling, nothing more formal than that really. Flashes went off and Go-Pro cameras were started. Mark set his Garmin; we did one lap of the square and headed out of Wantage via Mill Street. It was still dark so our lights were essential. I worried about battery power despite having borrowed a spare battery pack from a colleague at work. I knew my back lights would be fine but the headlamp sucks power; I’d calculated 8 hours of useful light which wasn’t going to be enough over the 24 hours. Fortunately, there was a spare light available.

Out of Grove to Shrivenham via Denchworth. We stopped briefly at Fernham to meet Marks mum and dad, they were waiting for us on their front lawn in PJ’s and dressing gowns perched on dining room chairs. That is dedication for you at 6:15am!  Marks dad had provided our ride jerseys; it was a good opportunity to say thank you. We had noticed the light begin to change before the stop but now, dawn was coming on a-pace; the sky a much lighter, cool blue.

We settled into a rhythm of passing the van at junctions, this was useful because it verified we had taken the right road. ‘Old man’s bladder’ started to gripe away when riding but get off, and the need seems to disappear. Taking on fluid and fuel was going to be key; it was something that could be forgotten very easily especially as fatigue creeps in.

Daylight was now definitely in full swing as we picked up Ermin Street, crossed under the M4 and made our turning towards Kintbury. Narrow lanes, puncture risks and fields either side in the crisp morning provided pleasant riding. The van pulled up, disturbing a huge Red Kite pecking at something unrecognisable on the road. We stopped for a toilet break by a field gate, the farmer was working in the top corner of his field and I wondered when his day had started.

‘I feel a bit bad now’, I said to Jamie as we passed the time of day with the farmer.

‘I pissed all over his field gate’ I admitted. It was galvanised, should be ok.

The road was surrounded by fields and wooded hillsides, we neared Kintbury and then made our way via some very narrow lanes to our first milestone: breakfast just south of Newbury.

Phil’s close family member, Andrew, has recently recovered from Non Hodgkins Lymphoma and he was keen to meet us with a few bacon sandwiches and words of encouragement. We spent a happy half an hour stuffing breakfast down with orange juice and coffee; pictures all round to be posted on Facebook. He is a very positive individual; it was clear that he wanted to be on the ride but now was not the right time.  Depending on his fitness, Andrew has a goal of riding through France and conquering Alpe D’Huez next year. From what I have heard of his character, he will be fully prepared for that. Andrew served to remind us why we were riding; I tucked this thought away for later when I knew things would start to get tougher.

There had been a lot of talk about the hills and how steep some of them were going to be. Leaving Newbury on the A343 meant climbing up a fairly nasty hill that seemed to keep going up; each bend revealed another steep section to be climbed. Mark is a strong hill climber and pulls away; Phil and I get the easiest gear turning and grind out the distance. Our styles are different but we always make it without the need to walk. This hill was another conquered milestone in the ride, we knew things would flatten out a little now and our pace picked up nicely as a result.

The inevitable punctures happened costing us 20 minutes to fix two back wheel flats.  Simon and Jamie helped out with gear and clearing up etc., they also patched the tubes just in case we got through all of the spares that we had brought with us. The plan had always been to put new tubes in to save time. Their can-do attitude meant we just had to concentrate on turning the pedals. The New Forest was approaching rapidly but our timings were adrift a little, catching the 2pm ferry now seemed unlikely. 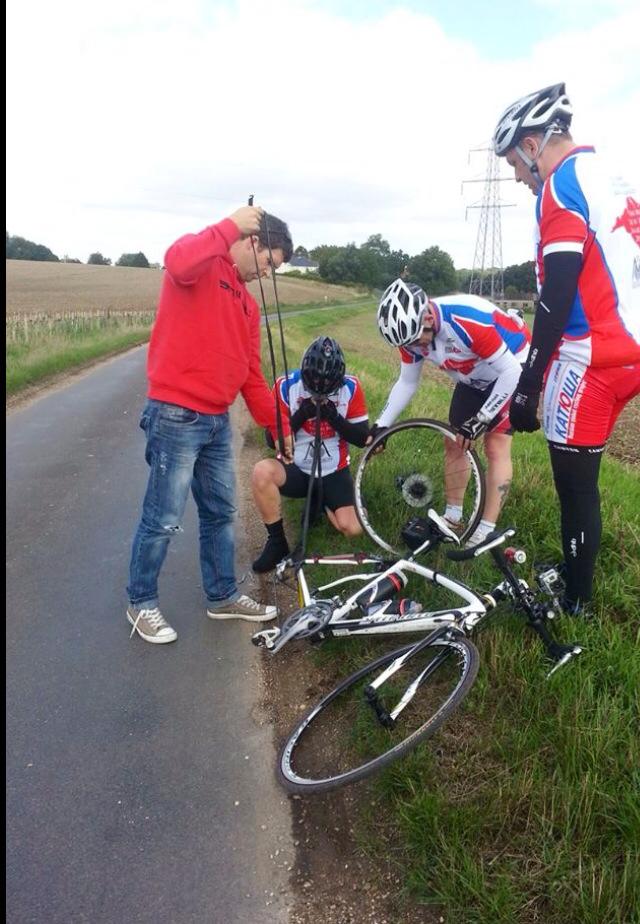 Undeterred, we reached the first cattle grid (a sure sign you are entering the New Forest!) and rumbled over it.  Greeted with nonchalance by the wild ponies, we swept through sunlit woods with the odd green space opening up either side of the road. The difference in temperature when in the forest compared to the open was discernible. After an hour or so the scenery became completely open and flat as we neared Brockenhurst. It wasn’t far now, meeting the ferry would be a matter of increasing pace and ensuring the van had our jacket potatoes ready to go. Jamie’s mum lives near Lymington, she had misunderstood how many riders needed feeding and prepared 12 jackets; but then, you can never have enough jacket potatoes when riding!

The familiar road to the ferry suddenly appeared and we rode into the terminal feeling happy that the first 100 miles were done. The van had not caught up at that point and it was clear that we were not going to get everything done in the 10 minutes before the ferry left.  We agreed that the additional rest and relatively relaxed meal would stand us in good stead later in the day so we bought tickets for the 3pm ferry. The pressure was off for now, we spent time checking our kit and eating. It might be possible to make up a little time on the island and catch the planned ferry on the way back but we had no idea how hilly the island was going to be.

We rolled up the ramp with the cameras running and parked up right by the bow doors.

‘I haven’t got a lock, I suppose the bikes will be ok?’, Phil said.

‘Erm, they’d be hard pressed to get away with them given our position at sea!’, I replied.

Banter, mickey taking, call it what you will but it serves to bring people closer together on any team.  Seeing the funny side of life generally makes things easier. Nothing else to do now except relax and get the coffees in and catch up on the Facebook posts…next stop Isle of Wight.

1 Comment Responses to The Big Isle Be Back Challenge – Wantage to Lymington-103 miles
find out more2020-12-02 08:14:53Reply
Wooden household furniture has one thing incredibly organic about it. There is this sense of heat, of attribute and of sophistication that can be be found in wood furnishings. Wood is actually birthed coming from the earth. It feeds the fire, degenerates in to ashes and drafts away. It is quite near the human presence in the world. Might be actually that is actually why it sounds a lot along with us. When you touch a wealthy mahogany work desk, might be that is actually why you still get that warm sensation.
Phil Cox | Wantage Stands Up to Cancer2014-05-01 09:10:50Reply
[…] http://www.phil-cox.net/the-big-isle-be-back-challenge-wantage-to-lymington-103-miles/ […]
Leave a comment

My Tweets
RT @HyperMining6: 📣HyperMining Warm-up Event: $HVT GIVEAWAY! 🚀To enter: 1️⃣Follow @HyperMining6 and @HyperVerse6 2️⃣Like & RT this post 🎁…24 weeks ago
@sarahke79350819 @BENJSCOX @Davidasgore https://t.co/ZhbegPWOnA26 weeks ago
RT @HyperVerse6: 🔥HyperVerse Special Event: $HVT GIVEAWAY!🔥 📣To enter: 1️⃣Follow @HyperVerse6 2️⃣Like & RT this post 3️⃣Tag 3 friends 💰100…26 weeks ago
Holidaying I. Cornwall with brilliant weather reminds me of the first couple of days of #lejog.… https://t.co/ccicYqZRRF57 weeks ago
@daveake @robcollyer Aerials all secure. We got some video but I think we have a power issue with the cameras as th… https://t.co/g9SMD8Y9P160 weeks ago