The website has been a little blog free over the past couple of weeks due to a busy period at work and also the need to get ready for dispatching books when they arrive. Additionally, I spent last Sunday riding in the White Horse Challenge (I’ll blog this later) and most of this week organising a bake sale raising money for Breakthrough Breast Cancer.

A team of 15 riders are riding the London Knightrider in June to raise money for this charity, we have organised a number of events leading up to it and have accumulated £3,050 prior to the bake sale. Five of the team turned up this morning to support, the banter and camaraderie abounded.

The bake sale was fantastic; we were helped by our own local fund raising celebrity who undoubtedly improved our profile and income. Ray Collins spends a lot of his free time raising money for local charities in Wantage, in fact, well over the £50,000 mark in the last 7 years. This year is no exception, he is revitalising the Wantage Carnival; no small task. As a community, we all pitch in on each other’s projects; Ray booked a day’s leave to help us this morning. I was a little worried that we would not have enough cake to sell but this proved to be unfounded. 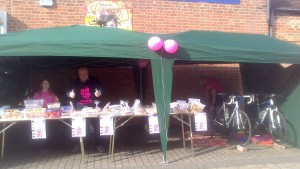 Ray and Harriet, I’m stripping off in the background.

Steve and I arrived at 8am with our bikes and turbo trainers (Nobby pitched up to ride with us too); these were set up under a huge gazebo along with a couple of trestle tables from the cricket club. The idea being that we would cycle away as a point of interest, drawing the punters in to buy cake. In reality, three middle aged berks pushed the pedals round and sweated a lot but no one seemed to mind. Once again, Facebook made sure that the event was well advertised and recruited bakers with ease upon our behalf. By the time I had parked the car up and returned, the two tables were groaning with cakes and more arrived as the morning progressed.

I met and chatted to a lot of people: some old friends from school and some new friends made through social media. I finally got to meet Stephanie Jones who had driven in from Oxford with cakes. Stephanie helped to read through the first draft of Point North & Pedal, she provided corrections and suggested changes, something I appreciated a lot. Sarah Keane had driven from Duckington to deliver her cakes as she could make the sale itself; thank you to all those who made the effort.

The cake mountain diminished as we sweated away on the turbos; it rained a bit but that didn’t stop people buying. By 1.30 we had sold out and started to pack up. The total raised for the day was £669; an unbelievable amount which takes us to the £3,700 mark, £5,000 could definitely be on the cards. I think most people were happy with that. Tomorrow is the first time in a long while were I do not have to get up early, I’m looking forward to a slow start to the day followed by cricket at home v Letcombe. However, I am not looking forward to Monday when I wake up and roll out of bed in bits…roll on my cricketing pension!

Steve and me ‘working for cake’.

My Tweets
@PitchedInLine @CPL Woa!17 weeks ago
RT @RossKemp: As an ambassador of @EndeavourFund, I believe that sport is for everyone, and today’s @SuperheroTri was a perfect example of…21 weeks ago
@englandcricket @JofraArcher And they call us whining poms.....🤣22 weeks ago
RT @CDCSSGUK: CdC Week: Family Celebrations! https://t.co/kTT3xwlKzz https://t.co/RCZAfeskVG37 weeks ago
@ClairePritchett Good to know5 hours ago